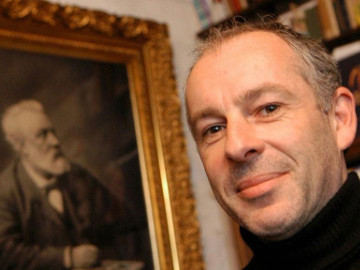 «Just like Robur-le-Conquérant of my great-grandfather, Jules Verne, Raphaël Domjan tempts fate with his extreme adventures by water, by air and, perhaps, one day by fire to show the world that nature and its forces can be conquered, without destroying it, polluting it, upsetting it through greed. Far from a submissive ecology and nostalgia for a return to the past which would be better respected by ignoring discoveries, Raphaël Domjan wants to show that the modern ecologist acts, looks for, proves, risks, ventures into the most advanced technologies, not to enrich himself at the expense of others, but to find the best balance between performance and future compliance. Will he be disillusioned as Nemo became by the greed of men? Drunk with power as Robur was because he was not understood? Uncontrollable, as the Gun Club heroes who were grasping for power after their trip to the moon? Or philosophical as Phileas Fogg? I wish him the last solution – as I suppose my ancestor would have absolutely wished him – once he had tried generously to offer the world a vision of science and technology respectful of nature and meaningful for humanity.»